By their nature, Lagrangian particles have a unique way of tracking physical quantities in complex flows. Their properties are less constrained by mesh resolution, and at the same time they can interact with great detail and realism with fluids and solids through mass, momentum and heat transfer. On the post-processing side, particles can enhance visualization. 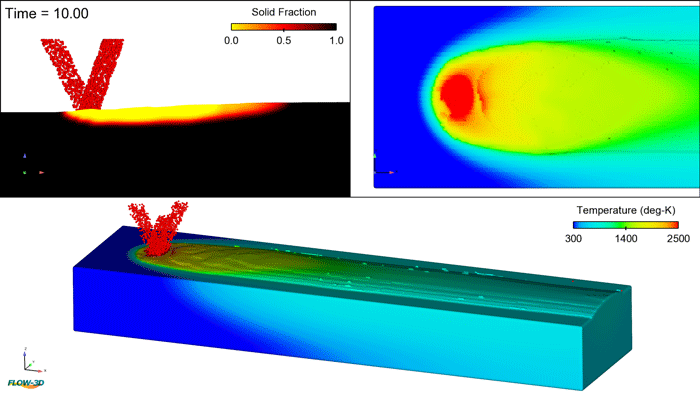 FLOW-3D‘s particle model has evolved from markers to mass particles of different size and density, including electric field effects and two-way coupling with fluid flow. The model has been successfully applied to tracking pollutants in air, inclusions in metals, and debris capturing in separators to name a few. More recently, the particle model in FLOW-3D has undergone a major transformation to expand its capabilities. In the current model, particles are grouped into classes based on their primary functionality:

Multiple species can be defined within material particle classes, representing particles of different sizes and densities.

Heat transfer with the surrounding fluid is another feature that applies to all material particles, i.e., mass, liquid, gas, void and user particles.

Pressure in the gas particles is calculated using the equation of state and changes in response to changes in temperature. If a gas particle escapes the fluid free surface, it adds its volume to the gas region.

Fluid in the liquid particles can undergo phase changes due to evaporation and condensation as well as solidification. Solidified particles behave as solid objects, similar to the mass particles, but are converted into fluid once they enter it and re-melt. In addition, when the two-fluid Phase Change model is activated, liquid particles can evaporate and condense while moving in the gas, making it useful for modeling spray cooling.

Each particle class can be visualized in FLOW-3D POST as a separate object. Individual particle attributes, such as speed, temperature, particle life time or its unique ID, can be used for coloring. Displayed particle size reflects its variation within the class.

Directed metal deposition is a type of additive manufacturing process where a laser is used to form a melt pool in a solid metal substrate, into which a stream of powder of the same metal is injected. Once the powder particles melt inside the pool and the pool re-solidifies, an elevated layer of solidified metal, typically 0.2-0.8 mm thick and 1-2 mm wide, is formed.

As the laser/powder gun assembly continues to scan the surface of the substrate, complex shapes can be built, layer by layer. A proper balance between the laser power, speed and the powder supply is important for the success and efficiency of the process. Of primary interest to engineers are:

The simulation described in this section attempts to predict exactly these characteristics. The motion of the laser and substrate is inverted by attaching the coordinate system to the laser. The substrate of Inconel 718 alloy moves at the constant speed of 10 mm/s. The laser is modeled as a circular heat source, 1 mm in radius, with the power of 1.8 kW. Three powder guns deliver solid metal particles at the laser impact point at the rate of 0.684 g/s. Each gun is represented with a particles source 2×2 mm in size and with the rate of 105 particles per second.

The simulation was run for 10 seconds, with the particle sources activated 2 seconds after the start to allow for a melt pool to form before adding the powder. Once in the pool, the particles melt and are converted into metal causing the volume of the metal to increase, ultimately forming a layer of the re-solidified metal downstream from the laser. The melt pool shape is shown in the plane of symmetry.

The Lagrangian particle model greatly expands the current capabilities of FLOW-3D and serves as a strong development platform for future extensions, such as tracking core gas bubbles in the metal.