Design of a Sewer Transition

This article was contributed by Daniel Valero, Rafael García-Bartual, Ignacio Andrés and Francisco Valles of the Polytechnic University of Valencia.

In December 2010, the new high-speed train MADRID-VALENCIA (Spain) was inaugurated. One of the many technical problems to overcome before construction was the railway entrance at the city center, consisting of a tunnel, which forced a deviation of the main south sewer at Valencia. The deviated reach has a length of 143 meters, and involves important changes of slopes and sections with respect to the existing one, including a complex hydraulic design detailed below. Its hydraulic performance was checked by means of both, numerical simulations with FLOW-3D and a physical model at the Hydraulic Laboratory at the Polytechnic University of Valencia. Tests were made for the maximum capacity of 100 m3/s.

Figure 1 shows the main features of the sewer geometry design, which includes a standard WES profile located right after crossing over the railway tunnel. This weir forces a supercritical flow with high flow velocities. To avoid the establishment of undesirable flow conditions downstream, a stilling basin was designed immediately downstream the weir. Such a device forces a hydraulic jump involving high energy losses and subcritical flow conditions at the connecting downstream sewer. To guarantee the flow’s behavior under different discharge conditions, two longitudinal rows of triangular blocks at the channel were included, which acted as energy dissipators in order to localize the hydraulic jump in the stilling basin length. The connections between the new deviated channel and the previously existing reaches (upstream and downstream) are smooth geometrical transitions (Figure 2).

In order to optimize the computational resources for an accurate solution of the problem, the sewer was divided into several overlapped reaches, so that the continuity of the hydraulic solution was guaranteed, and also a finer mesh could be used in each of the reaches considered. As the most complex flow occurs in the stilling basin, such reach was solved with the highest resolution (6.000.000 cells), with a gradually varied cell size from the contours and bottom blocks to the central flow areas. A video of the hydraulic jump simulation is located at the end of this article.

The k-e RNG turbulence model was selected, with an explicit second-order monotonicity preserving scheme for advection. Split Lagrangian method was used for free surface representation. Transient flows previous to the steady state solution were simulated with a coarser mesh. Figures 3 and 4 show some relevant results of the numerical simulations. Also, a video is annexed to this technical note showing numerical simulation of hydraulic jump.

Further simulations were carried out to account for air-entrainment occurring at the hydraulic jump, and in particular, the interaction between turbulence and free-surface. Figure 5 shows the result, using FLOW-3D’s air entrainment model with the variable density option selected, and using the default coefficient of Cair = 0.5.

Comparison with the Physical Model

A physical model was built in the hydraulic laboratory of Polytechnic University of Valencia. The geometrical scale used for the model was 1/20. General agreement was observed between both approaches. Figure 6 shows a profile of the critical cross section, right over the top of the weir. The average depth error found was 1.3%. Other structural properties of the flow were properly reproduced by FLOW-3D. For instance, the transversal profiles of the free-surface along the curved reach of the sewer and the size of side-depressions of the free surface due to the transition upstream of the weir. 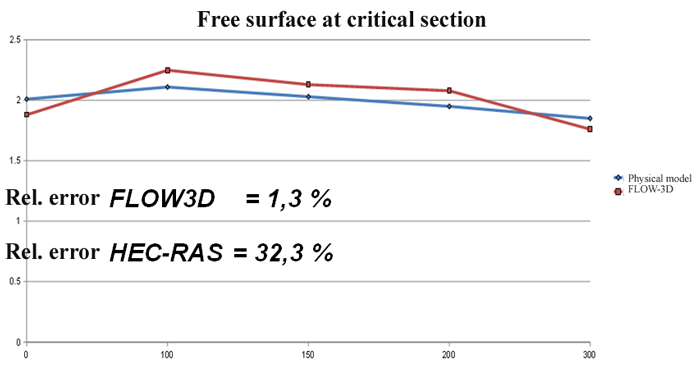 The results of this study are very satisfactory, although some differences between the laboratory results and FLOW-3D simulations are identified. Watch the videos below for a comparison of laboratory and numerical modeling results.

FLOW-3D can reduce the number of experiments at the laboratory when testing a number of possible geometries or hydraulic designs. On top of that, and regarding the final design, it can help to extend the results and measurements taken at the laboratory, as files from FLOW-3D provide a detailed space-time distribution of relevant fields like velocity, vorticity, turbulence intensity, etc. The combined technique is clearly a powerful tool for design, verification and optimization of hydraulic infrastructures, like the one mentioned in this research.