Many factors influence marine aquaculture: tidal fluctuations, water temperature, food concentration and stocking density, among others. Success in this industry depends on balancing what you can control with what you can’t, and putting years of experience behind day-to-day decisions. Nowadays there’s another tool to help you identify productive sites and plan management strategies, especially considering sustainability: computer modeling targeted to aquaculture. A Maine-based business has been busy making this approach an integral part of the shellfish aquaculture industry, and to prove it they use it to run their own commercial farm.

When the Irish Shellfish Association (ISA) approached Blue Hill Hydraulics (BHH) in 2005, they, like others, were looking for novel approaches to improve the siting and operation of nearshore aquaculture operations. To increase the production of shellfish such as blue mussels, manila clams, geoducks and oysters, BHH regularly answers such questions as how many shellfish can you put in a particular area (i.e., what is the optimum stocking density)? And what should their spacing be so they will grow to market size in a given period of time, say 18 months?

It is FLOW-3D‘s inherent simplicity that lends itself to use in real-world problem solving. Rather than spending large amounts of time pre-processing (i.e.,setting problems up), users can spend their time applying the results of their work.
– John Richardson, President of Blue Hill Hydraulics

Detailed answers to these questions depend on the specific type of aquaculture method used. Common techniques for growing mussels involve the use of rafts or long-lines as the base structures from which to hang ropes suspended in the water. Farmers place seed mussels inside biodegradeable “socks” that surround the ropes, then the mussels attach themselves to the ropes in a natural anchoring response that takes place before the socks decay.

With this method, planning factors include the rope-length, rope-diameter, the design of protective predator nets, particulate (food) density in the ocean water, and water temperature. Similar issues are involved for oysters raised in flat net-bags stretched across gridded trestles. The overall goal is to maximize the number of shellfish grown to market size in a minimum amount of time. To achieve this goal, understanding the way that water flows through the aquaculture systems (gear) is critical.

Seasoned farmers have always made their decisions based on years of experience, but natural fluctuations in harvest numbers and a greater concern for the environment has more recently forced them to investigate unfamiliar situations. They’re now looking for better ways to determine how to grow more shellfish faster and how localized nutrient concentration is affected by the presence of the farms themselves. The ISA, with funding from the Irish government, asked Blue Hill Hydraulics to create a computer model that could take these and other effects into account and serve as a tool for making better decisions in the future.

A Systematic Approach to Growth Analysis

John Richardson, president of BHH, and Carter Newell, a marine biologist, formed the team that tackled this problem. No strangers to either ocean flows or shellfish physiology, the two have worked with computer modeling since the 1980s and operate their own shellfish farms off the coast of Maine. Clients of theirs include commercial growers’ groups in Virginia, Connecticut, Washington State and British Columbia.

The duo’s first project involved modeling bottom-culture farming techniques. The two analysts used a numerical modeling approach to identify culture sites that would support growth of the greatest number of shellfish. Since this type of analysis involved working with the combined parameters of both food consumption and fluid flow, they needed an advanced computing capability that was easy to use.

Computational fluid dynamics (CFD) computer programs are designed to simulate fluid flow in three dimensions and are sold by at least a dozen commercial companies. All such codes can predict the movement of particulate (nutrient) matter in the water, but calculating the interaction of the food particles with the shellfish, and doing so efficiently, narrowed the options down to FLOW-3D.  This software’s ability to model flows through porous media, as well as its easily customizable structure, made it the cost-effective choice.

Richardson, a mechanical engineer with 15-years of FLOW-3D modeling experience, designed an expert system where a menu-screen would prompt the user to input such field data as number of long-lines, their length and spacing, drop-line spacing, rope length, rope diameter, shellfish density, particulate availability and water flow speed. Once a given set of inputs were defined, FLOW-3D would calculate mean values for food concentration in micrograms per liter at any location inside of the computed region, as well as the change in water-flow speed as the mussels grew or more were added to the production site. These simulated results provided a framework for evaluating alternative farm layouts, which could then be run with a revised set of input parameters.

Behind the menu-screens lay the processing power of FLOW-3D. Of particular interest was the approach used to identify obstacles in computed regions. FLOW-3D uses a method known as Fractional Area/Volume Obstacle Representation or FAVOR™ for short. Unlike other, less flexible CFD programs, this software performs calculations in a structured grid where cells are partially blocked or completely blocked depending on the location of obstacles in the computed region. This practical approach to grid generation gives the user the control to model flows with a high degree of detail in some regions while modeling flows more coarsely in others (thus minimizing overall calculation times).

Richardson defined areas occupied by shellfish as porous obstacles with the porosity of each based on the number of shellfish present. As a calculation proceeded, the porosities of each region were changed based on the amount of locally consumed food. In addition, the availability of food downstream of the shellfish was reduced by the amount of food already consumed. Accounting for these consumption effects forms an important factor in the design of shellfish aquaculture farm layouts.

Once an obstacle is located within a modeled region, FLOW-3D lets users give it multiple properties—not only can you make the object porous, you can let it move with the water’s flow, and you can even designate thermal properties. It’s these special features that Richardson particularly likes, again contrasting the software’s approach to that of most other fluid-flow packages. He explains, “The FLOW-3D input structure is compact and very flexible. With a little creativity, the setups for very unique problems can be constructed, giving you a lot of value and insight for the money.”

The ability to model flow through porous regions is particularly well developed in FLOW-3D and perfect for determining stocking densities that maximize production based on a given set of growing conditions. Richardson found it easy to incorporate both porous- and open-flow regions in his models; he noted, too, that the preprocessor automatically remeshes the problem when you want to rerun the model with a different setup. Other CFD programs can require complete manual remeshing of the problem every time an obstacle is moved.

Using field data collected by Newell to calibrate FLOW-3D‘s performance, Richardson was able to correlate predicted flow speeds inside the farming structures to actual measurements within a 4.5% error. Food concentrations were also measured at different locations, and the simulated values showed less than 3.9% error. Other factors that were considered, such as rotating and anchoring the long-lines to be oblique to tidal currents (15- to-45 degree rotations), were shown not to have a significant effect on the availability of the food supply and therefore not worth a layout change.

Taken together, the FLOW-3D results showed how farmers could adjust the stocking density and distribution of their shellfish to maximize the productive capacity of their farms. Shellfish growers have subsequently made a number of changes to the size and distribution of growing areas in Killary Harbour and are reaping the rewards of this work. Furthermore, the Sea Fisheries Board (BIM) is making this analysis available to other interested parties in Ireland.

Where to Go from Here 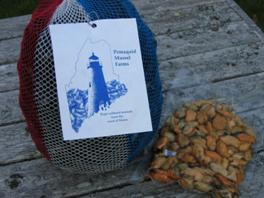 Richardson and Newell are continuing to use their study methods to help shellfish growers increase their production and minimize their impact on the environment in the United States and abroad. Closer to home, the duo is using the analysis tools to improve the production of their own mussel and oyster farms located on the Damariscotta River in Mid-Coast Maine, and in the mouth of the Penobscot River in Downeast Maine.