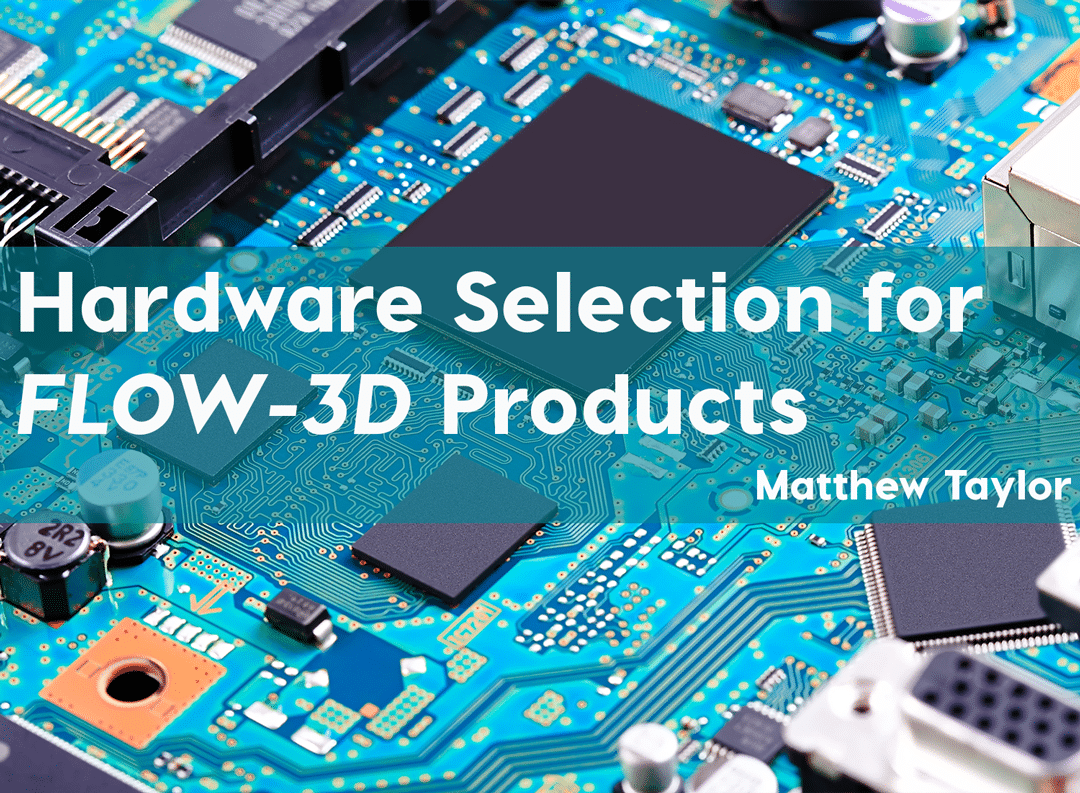 In this blog, Flow Science’s IT Manager Matthew Taylor breaks down the different hardware components and suggests some ideal configurations for getting the most out of your FLOW-3D products.

While we publish general supported platforms guidelines, we are often asked for more specific information on choosing new hardware. This article delves a bit deeper into hardware selection for FLOW-3D products as of late 2019. At the end of this article, we’ll give you some ideas for different configurations, depending on the types of simulations you are running.

FLOW-3D is a computationally-intensive program to run, because CFD solver performance is entirely dependent on the floating-point performance of the CPU. FLOW-3D POST is also highly CPU-dependent. While we can’t benchmark every available CPU, we can reasonably compare relative performance.

Since this is a paid benchmark, not all CPUs will be tested. Expensive configurations such as multi-socket Intel Xeon machines with large amounts of RAM are well represented.

Another option for CPU comparison is Passmark Software’s CPU benchmark. While their PerformanceTest suite is paid software, there are free trials available. Most CPUs are listed, including most lower-cost options. Although floating-point performance is only one aspect of the full benchmark, it is a decent test of overall performance in a variety of workloads.

Once you’ve determined your budget and chosen some CPUs that fall within that budget, you can use the benchmarks to determine the best performance for the price.

Typically, chips with higher clock speeds include fewer CPU cores. FLOW-3D is well-parallelized, but some operations are inherently single-threaded, such as disk writes. Simulations with frequent and/or large data output often benefit from a higher clock speed rather than more cores. Similarly, multi-threading across cores and sockets introduces overhead, so for very small problems, restricting the number of cores used may increase performance.

Architecture is important. More recent CPUs typically provide more functions per cycle. This means current-gen CPUs will usually outperform older CPUs at the same clock speed. They can also be more electrically efficient, leading to higher performance per watt. At Flow Science, we have machines with current generation 10- to 12-core Core i9 CPUs that outperform older, multi-socket 12-, 16-, or even 24-core Xeons.

We do not overclock CPUs. We consider hardware a multi-year investment, and overclocking increases heat, which reduces longevity. Depending on the CPU, stability may also be decreased. When overclocking CPUs, careful thermal management is highly recommended.

For a few workloads, we have observed slightly better performance with HyperThreading enabled. It may be worth testing your common simulation types in both configurations for the best possible runtimes.

The performance increase when using multiple cores is not linear. For example, upgrading from a 12 core CPU to a 24 core CPU will not halve simulation runtimes. When choosing more than 16 to 32 CPU cores, depending on your simulation type, utilizing the HPC versions of FLOW-3D and FLOW-3D CAST or moving to FLOW-3D CLOUD should be considered.

How about AMD Ryzen or Epyc CPUs?

AMD is topping the benchmark charts with some CPUs and their prices can be extremely competitive. We have tested FLOW-3D with a small selection of AMD CPUs, and our current feeling is that Epyc is not ideal, and that Ryzen performs fairly well. Heat is still an issue that must be carefully addressed. We are aware of a Windows bug affecting their 32-core options that dramatically degrades performance; Linux would be recommended for these CPUs.

At least 4GB of RAM per processor core is a good starting point for FLOW-3D. When postprocessing results using FLOW-3D POST, a significant amount of RAM is recommended. The following recommendations are from an earlier blog post, Good Hardware Means Improved FLOW-3D POST Performance:

Faster RAM can improve performance, but large amounts of very fast RAM can be costly. The effect of RAM speed is hard to measure effectively, which makes price/performance hard to determine. We recommend choosing the fastest RAM that fits your budget, and when in doubt, choosing a larger amount of RAM rather than higher speed.

An unbalanced configuration, where the memory channels or DIMM size/speed are mismatched, reduces performance significantly.

We very strongly recommend nVidia’s Quadro graphics hardware. These are available at a range of price points and are included in higher-end, workstation-class notebook PCs. A card with at least 3GB of VRAM should be chosen.

AMD graphics cards are not recommended. Intel integrated graphics are explicitly not supported. Some laptops include both Intel integrated and nVidia discrete cards. In those situations, you will need to use the nVidia control panel to use discrete graphics for FLOW-3D and FLOW-3D POST.

Extremely low-end motherboard graphics on servers and HPC nodes, which do not support 3D acceleration, CANNOT be used and are not supported.

On Windows, the Quadro driver automatically enables OpenGL over a Remote Desktop connection.

On Linux, additional software is required to support OpenGL over a remote connection, and that typically requires Quadro hardware. The only working solutions for remote visualization of the FLOW-3D or FLOW-3D POST GUIs on Linux are Penguin Computing’s Scyld Cloud Workstation (SCW), which can be purchased and run on local machines, or Nice Software DCV, which was recently purchased by Amazon for use on AWS and may not be available for use on local machines.

VNC servers do not support OpenGL over a remote connection and are not recommended or supported.

We periodically test the freely-distributed VirtualGL/TurboVNC combination, and historically it has not worked with FLOW-3D. Significant issues such as freezing when accessing OpenGL windows and strange geometry artifacts have been observed.

We are currently testing the latest VirtualGL 2.6.2 but cannot yet recommend it. It is significantly more difficult to install, implement, and use than Penguin’s SCW. Since Flow Science cannot support remote visualization solutions, we recommend buying a product with support for installation, implementation, and maintenance.

We strongly recommend using solid state drives (SSD) rather than traditional spinning hard disks. Prices have reduced a great deal over the past several years and continue to drop. One ideal option is to use a 1TB or larger SSD for short-term storage of simulation results and postprocessing, with a larger HDD RAID array or external storage option for archiving older results.

Given the above recommendations, here are some ideas for possible configurations and how they might be used:

Please feel free to contact us to review your vendor quotes or parts lists for new hardware. We’re happy to help you acquire the right machine(s) to maximize your success with FLOW-3D.