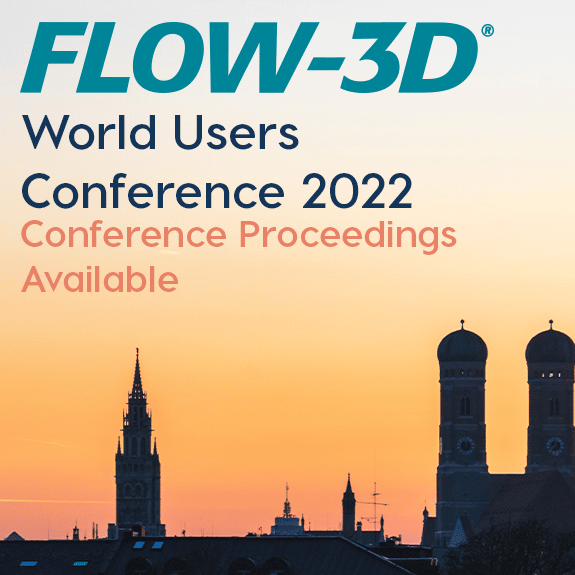 Download user presentations that focus on applications of FLOW-3D for the automotive industry, such as tank filling, gear simulation, fuel sloshing and injection systems.

FLOW-3D is a powerful tool for tank filling simulations, supplying accurate results, allowing one to easily build and modify models, and offering a wide range of physics. However, full two-fluid simulations (liquid and gas) are often unstable and very time consuming. A meshing technique was developed to overcome stability issues that were mostly due to mesh block interfaces. However, the issue of long computation times remained. An optimization project was conducted using DFSS (Design for Six Sigma) methodology. A reference tank system model was chosen. Two different setups were determined as extreme conditions for initial filling and fuel properties. A set of twelve sensitive numeric and meshing variables was determined. An orthogonal matrix of 24 simulations was then filled to assess the influence of each parameter on simulation time, accuracy and robustness. As a final result, an optimized simulation setup was determined which demonstrated significant increase in speed without loss of accuracy. As a final validation, the same optimized setup was tested with a different tank system, resulting in a similar performance increase.

Simulation of sloshing inside an automotive fuel tank

Sloshing is a complex phenomenon and an important design issue in automotive fuel tanks, because it can influence vapor and noise generation with potential effects on pollutant emission and NVH performance. Accurate fluid motion prediction in heavily dynamic conditions is a first requisite toward the pre-emptive simulation of these phenomena. A complex activity has been jointly set-up toward this target, by Fiat Chrysler Automobiles (FCA) and the University of Naples “Federico II”. A very rigid fuel tank mock-up, with flat transparent windows, has been built. It has a simpler shape than a production tank, preserving however the significant dimensions and many of the prominent features. A benchmark for fuel tanks has been installed on the FCA dynamic testing system to obtain detailed sloshing data. Harmonic motion has been used, with different amplitudes and frequencies, as well as different tank filling levels. On the numeric side, FLOW-3D has been used to test many different grid sizes and physics combinations. Then a complete experimental-numerical comparison has been performed, implementing image processing and statistic tools (Matlab™) to achieve objective comparison of the free surfaces and the center of mass motion. The final results have been satisfactory, showing only minor deviations of simulation from test, opening the way to fluid-solid interaction and vapor generation modeling.

With more than 18 million parts produced in 2015, Plastic Omnium is the world leader of plastic fuel system for the automotive industry. The ability to deliver products with flawless refueling quality for premium and standard customers is mandatory. Any car driver expects to refuel his vehicle without premature nozzle shut off, spitback or spray in any real life condition.

For the development teams, reaching excellent refueling quality is complex, time consuming and very expensive. The constraints are numerous, among them:

It is therefore requested that the simulation engineer can validate numerically a filler pipe design within two days or less.

The continuous demand for reduction of development time and improvement of quality design led to the introduction of virtual analysis at Reutter Standard. The following three different applications will be presented:

Based on these successful applications, Reutter is planning to implement FLOW-3D for other applications such as valve simulations and injection molding.

Using the standard FLOW-3D solver and the GMO model it is possible to simulate the movement of gears with a very good level of detail. However, it is very difficult to couple the motion of several different gears and almost impossible to add elements such as belts and chains to simulate their movement. Furthermore, due to pressure instabilities that occur during the interaction between different moving objects rotating at a very high speed, the standard FLOW-3D solver does not allow such a system to be effectively simulated. For these reasons, a customization of the GMO model and the pressure solver has been developed, to simulate the movement of chain and belts, to couple the motion of different gears, and to stabilize the pressure solver in order to avoid pressure convergence failures. This customization has been developed along with a new specific graphical interface that allows users to set up the geometric and cinematic part of the simulation without effort, generating a prepin file to be imported into the FLOW-3D interface. Using this new software, FLOW-Mech, automotive and mechanical industries can benefit from the accuracy and physicals model of FLOW-3D, easily simulating complex mechanical systems, like gearboxes, timing belts or chains, and engine parts.

Simulation of a pressure limiting valve

In current injection systems, pressures have been dramatically increased in order to improve fuel combustion and emissions. Pressure limiting valves (PLV) are needed to avoid safety problems in those circuits. The opening of the PLV is highly complex due to the size of the model and the different physical phenomena involved. In some areas the space between parts is lower than 0.1 mm and the model has a max c.a. 60 mm. In the simulation we have taken into account the movement of the stopper, the force of the spring and the transient during the opening. In order to achieve affordable calculation times we have utilized sub modeling and customizations. Using sub models, we have achieved suitable calculation times by adding the characteristics of the sub model into the complete model using customized boundary conditions. Further reductions in time have been achieved using cylindrical coordinates systems and axisymmetric models.

An advanced approach based on thermo-fluid-dynamic software simulation was utilized to model the full cycle of a remarkably- sized reciprocating compressor for an oil & gas application. Using FLOW-3D, a 3D CFD model was developed, simulating the cylinder with a mobile piston and valves, including supply and suction chambers and ducts as well. The 3D domain of the compression chamber changes with the piston motion law while valve rings move according to the fluid dynamic forces. This work was integrated within a methodic process which is meant to optimize the compressor efficiency during the design phase.