Many continuous coating processes employ slot coating devices because of their relative simplicity. With this type of coater, ink is forced out of a slot onto a rapidly moving substrate. Sometimes multiple slots are used to create layered coatings of several materials. In the accompanying example only one slot is applying a 120-micron thick layer of a non-Newtonian material on a web that is moving from right to left.

In FLOW-3D, fluid-solid contact lines and contact angles are automatically computed as part of the overall dynamics of the flow. This is well illustrated in this example where three separate contact lines develop in the region between the slot and the web. 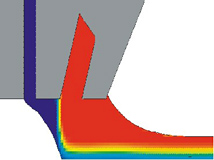 In the time series image below, the web is moved, and the slot coating die has two slots from which two different fluids issue. The advantage of the two-layer slot die is to reduce the number of die stations in the coating train. However, there are a number of challenges present in two-layer slot coating that do not exist in the single-layer case. The interlayer, the interface between the two (usually miscible) fluid layers, should remain stable and pinned to the die surface. Also, recirculations in the vicinity of the interlayer should be minimized to avoid mixing of the two fluids. These are controlled by manipulating the density, viscosity and flow rates of each of the fluids. 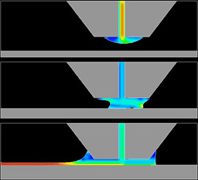 When starting a continuous coating process with a slot coater, it is desirable to have uniform wetting established on the web as quickly as possible, in order to reduce the amount of imperfect material that must be discarded from the beginning of the run. A wet start, in which ink is first allowed to run out of the slot before it is brought near the web, is one technique to insure good wetting. In this example, the web is moved toward the slot squeezing liquid both upstream and downstream. A slightly slower approach speed that would not push liquid up the sloping front surface of the slot device would give better performance.