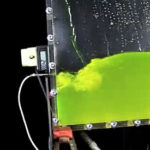 This case study was contributed by Peter Arnold, Minerva Dynamics.

The objective of this work is to validate FLOW-3D against a sloshing problem in a sealed narrow span rectangular tank, subjected to roll motion at periods close to or equal to the tank’s internal wave resonance period, such that side and roof wave impact events occur. The tank was filled to two different levels with water or sunflower oil, with the space above filled by air. Pressure sensors were installed in the walls at several places and their time histories, along with the roll angle, recorded for the first four sloshing periods. For the cases using oil, the flow is laminar with a Reynolds number of 1748, while for the cases filled with water the flow is turbulent with a Reynolds number of 97546. The CFD simulations used the body force method to replicate the harmonic roll motion of the tank, while grid dependence tests were performed along with different modelling assumptions to account for turbulence and air compressibility.

The original experiment was performed by Souto-Iglesias and Botia-Vera [1] and all experimental data files are available along with problem description, videos and an uncertainty analysis. The geometry shown in Fig. 1 consists of a rectangular tank of 900mm length, 508mm height and 62mm span, filled to either 93mm or 355.3 mm with either water or sunflower oil, hence four cases are considered. The locations of the pressure sensors that were installed flush with the tank walls are also shown. The tank rotation center is shown in Fig. 1, along with the rotation angle relative to the horizontal. Each of the experimental runs was performed 100 times to enable their repeatability to be assessed.

The problem was relatively simple to set up using the non-inertial reference frame model within FLOW-3D, which applies a body force to the fluid depending on the acceleration of the local reference frame. The Z axis rotational velocity was defined as a periodic function to simulate a roll motion of the tank, and a constant gravity force acting in the negative vertical direction was applied.

Multiple simulations were performed to investigate such things as mesh refinement, the numerical approximation order for momentum advection, laminar versus turbulent models and three different treatments for the air in the tank (i.e., constant pressure, compressible gas and incompressible gas).

The effect of mesh resolution on lateral water sloshing measured at P1 is seen in Fig. 2. It shows no particular bias in terms of the prediction of peak values. In all the Lateral cases, the pressures immediately after the initial peaks are consistently over estimated in the simulations. All meshes have excellent agreement in terms of the timing of the peaks. The experimental time histories reported from the 100 runs made are those with peak pressures closest to the average values.

In any event, the standard deviations are quite large compared to the peaks themselves, with the largest ratio of standard deviation to peak values occurring for the water-based cases and the lateral oil having the smallest ratio. These results are perhaps not too surprising when one considers the complexity of the wall impact dynamics as seen in Figs. 3,4.

Four configurations of a narrow tank sloshing problem were numerically simulated using a commercial CFD code designed for free surface flow. Two different fluids corresponding to Reynolds numbers of approximately 2 X 103 and 1 X 105 and two fluid depths were used to define the four cases. Mesh cell size independence tests were conducted for all four cases, but only a weak convergence towards the experimental results with increasing mesh resolution was found. The investigation also tested two different momentum advection numerical differencing schemes and found closer agreement using the 2nd order monotonicity preserving scheme than by using a first order scheme. Three turbulence models, including the default laminar flow, were tested but no preference was found for any model other than the laminar by virtue of its lower computational cost. Including the compressibility of the air-reduced agreement with the experimental data, the reasons for this are unclear.

The experimental pressure probe time history data sets included 100 values for each of the pressure peaks derived from 100 repeat tests, and thus we were able to examine the statistical significance of the agreement with the CFD simulations. Both the numerical simulations and the experiments gave rise to very steep pressure pulses corresponding to the sloshing wave impacts, and the experimental results were found to have a high degree of natural variability in the peak values. Although sensitivity tests of the CFD simulations (using, for example, slightly different initial starting conditions) were not formally conducted, the numerical solutions also showed a high degree of variability in the pressure peak magnitudes resulting from the use of different meshes, differencing schemes and turbulence models, which could be considered to show that the numerical solution also had a high degree of natural variability.

In all cases, the numerical solutions’ timing of the occurrence of the pressure peaks were found to be very accurate. However, even for the least challenging Lateral Oil case, the pressure peaks and the immediately following pressure values were overestimated, which indicated a shortcoming in the numerical modelling. When the experimental peak pressure variability was taken into account, the CFD-generated values fell inside the two Standard Deviation margin in nine of the 16 peaks rather than the 15 or more that would be required to show statistical significance in the sense that the CFD solution was representative of the experiment. This indicates that either the peaks are not normally distributed and/or the CFD model is in some way deficient at predicting them. Further work is required to establish how the peak pressures are distributed and/or to establish the physical reasons why the CFD model is overestimating the pressure peaks for even the least challenging Lateral Oil configuration.

The complete document from which this note was extracted and the related data and input files are available on our Users Site. Readers are encouraged to read the original validation to get a full appreciation of the detail in this work investigating comparisons between simulation and experimental data. This study is especially noteworthy since it deals with highly non-linear sloshing of fluids interacting with the boundaries of a confining tank.

With regard to the author’s conclusions, it should be mentioned that the over prediction of fluid impact pressures in simulations could be the result of not allowing for sufficient compressibility effects in the liquids. For instance, in Fig. 3, it appears that there has been some air entrained in the liquid near the side wall. Also, negative pressures (i.e., below atmospheric) recorded experimentally might result from liquid drops remaining on the pressure sensors after the main body of liquid has drained away. Such details, which may be hard to quantify, only emphasize the difficulties involved in undertaking detailed validation studies. The author is commended for his excellent work. 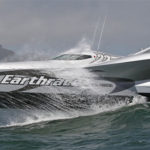 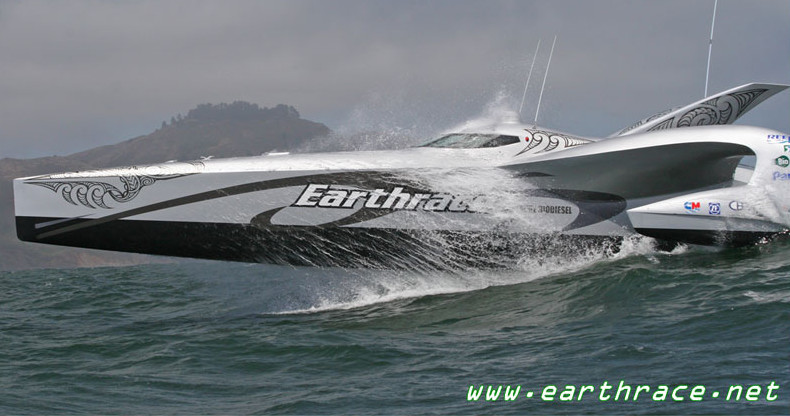 Earthrace is a wave-piercing 78 ft. trimaran powerboat designed to circumnavigate the world fueled exclusively by biodiesel. Earthrace, which aims to demonstrate the viability of biofuel to to power a ship around the world, found FLOW-3D invaluable for simulating and optimizing their design performance.

(We) were able to see how the boat was likely to perform in the different types of seas we were likely to come across on our global voyage. We were then able to modify the design to ensure that not only speed, but fuel efficiency and safety were taken into account. — Pete Bethune, skipper of Earthrace

One of the primary goals of the Earthrace design is to minimize fuel consumption. To achieve this, a unique hull design was conceived so that the boat pierces through waves instead of going over them. This design allows Earthrace to maintain a nearly constant speed regardless of how rough the sea conditions are.

Simulation plays an important role in validating new hull designs, since flow characteristics around the hull affect many aspects of the ship’s performance. However, simulating Earthrace poses challenges because traditional flow simulation tools assume the flow past the hull is relatively calm. In heavy seas, Earthrace is likely to experience significant wave forces all around itself as it pierces through waves.

FLOW-3D was chosen by the Earthrace project because of its ability to simulate general 6-DOF motion of the ship hull while fully coupling its motion with the wave motion. The sea state is computed from a solution of the fully non-linear Navier-Stokes. The sea state is coupled with the ship hull’s motion, which is treated as a rigid body subject to 6-DOF motion (surge, heave, sway, pitch, roll and yaw) including the thrust generated by the ship’s engines.

XC Engineering, Flow Science’s associate in Italy, ran the simulations for Earthrace. The simulations produced an accurate prediction of the hull’s resistance including form drag, skin friction and interference drag. These results were validated against scaled model tests. As a result, the Earthrace team was able to hit the seas with confidence in their design’s ability to break the world circumnavigation record.